To Infinity (or the Hudson) and Beyond!!

We have made it all the way to Lake Champlain, where we plan to spend the summer on a Pretty Wonderful Lake (since it didn't make Great Lake status!) We are tucked into a marina right by the Crown Point Bridge which spans the lake across to New York and is only 20 miles to East Middlebury and River Barn, the home of my dad, brother and family. The Middlebury River is making lovely noises as I sit on the porch and update the blog. 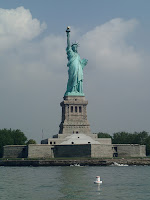 We had a good trip through the Intracoastal Waterway of New Jersey - skinny water at times, but we never touched the bottom and we were able to lead our friends on "Once Upon a Time" through also. We anchored behind the Statue of Liberty after entering New York harbor and connected with our friend Peter who came with us up the Hudson and through the Champlain locks. The cab driver from the Newark airport couldn't find the boat launch near the Liberty park and left Peter at the Liberty Landing Marina (at least he found water and boats). Jeff dinghied over to get him and after being swamped by a big boat as they left the marina, we got everyone on board.

The next day we headed up the Hudson. It is wondrous to pass Manhattan and skyscrapers, including the new Freedom Tower that has replaced the World Trade Center. Soon we passed under the Washington Bridge, a character in one of my favorite books as a child - "The Little Red Lighthouse and the Great Gray Bridge." The lighthouse is still there, dwarfed by the bridge. The river then turns from urban to amazingly wild with the Pallisades looming above on the New Jersey side. We timed our travels with the tide which gives a boost northward all the way to Albany! 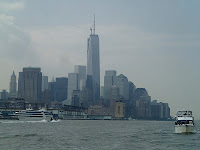 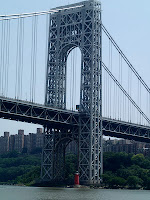 We stopped at Croton-on-Hudson for two nights - one at anchor and then into the marina for a night. Close by was an Enterprise Rental Car office and we were able to rent a car for the day and drive to Hyde Park for a day of Roosevelts. We visited Franklin's home, Springwood, where he was born and lived, and then Val-Kil, Eleanor's home after Franklin died. It was a good day of history. 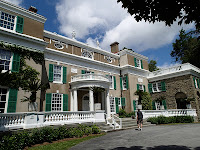 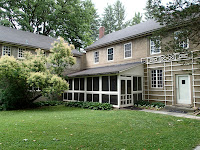 The next day, we continued up the river, passing under the Walk Across the Hudson - an old railroad bridge that has been made into a park for walkers and bikers. We tied up to a dock at a restaurant at the western base (free dockage if you eat there) and the next morning hiked up to the top of the bluff and strolled across to Poughkeepsie. The views were beautiful and it was a great adventure. 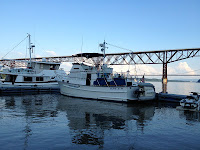 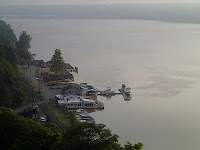 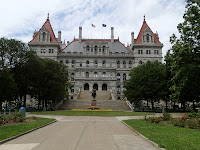 We continued on to Kingston, then Athens NY, a brief stop in Albany and finally made it to Waterford, where the Erie Canal comes in from the west and the Champlain Canal continues on to the north. The East has been having lots of rain - the Erie had been closed because of high water for almost 3 weeks and the rumor was it wouldn't open for another two weeks. We were very glad that we were going to Champlain. Many of the boats trying to complete the Great Loop trip have been stuck waiting for the Canal to open. 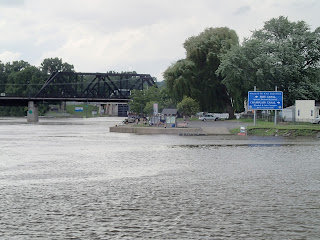 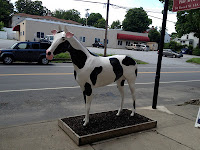 It was great to have Peter with us as we went through the 11 locks of the Champlain Canal. It is so much easier to have the Captain drive the boat into the lock and have someone on the bow and the stern to grab the lines hanging off the walls of the locks to hold the boat in place. We stopped in Schuylerville for a night and discovered a wonderful used bookstore, Old Saratoga Books - complete with a delightful painted horse right outside! Luckily it wasn't too far to walk back to the boat with my armful of books. 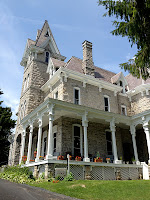 At the end of the canal is Whitehall NY, one of many towns claiming to be the Birthplace of the American Navy. Benedict Arnold built the boats that met the British on Lake Champlain here at the first naval battle of the Revolutionary War. The town is looking weary, but the free town dock had power to run the air conditioning on a very hot day and we had a steep walk up to Skene Manor, the mansion overlooking the town.

The last lock was transited and we headed up the narrow inlet at the southern end of the lake and had more days of history. We anchored for a few hours at the base of Fort Ticonderoga, dinghied over to shore (which involved paddling through the weeds that fouled the motor), climbed up to the fort and explored the reconstructed fort and grounds. 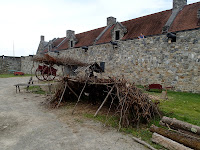 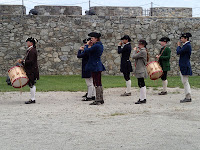 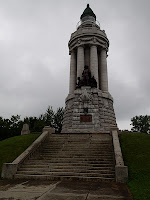 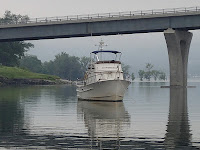 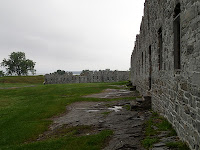 Now we will have time to explore the lake, spend time at Camp Sabael on Indian Lake in the Adirondacks and have more porch time at River Barn. Life is good. Sally
Posted by Colwell/Janacek at 3:01 PM No comments: