Adirondack has hiccupped, finally.... Trouble on the boat

So we pulled into Wilmington, planning on a seamless crew transfer from Bob and Susan to Doug and Linda. Just after we got in, I noted that the anchor chain had a bit of slack in it and hit the windlass button to take it up. The windlass gave up a funny chattering noise, sort of like a car starter with a dying solenoid. And then it quit altogether. This was bad, because we need the windlass to pull up the heavy anchor and chain. It's too heavy, even without a hernia. But, it could have been lots worse; we could have easily pulled out of here with the problem and not noticed it until we were going to anchor out somewhere. Or it could have happened after we dropped the anchor out in some secluded spot instead of in a well-respected boat repair facility.

I couldn't figure out the problem and had the boys here look at it. A day and a half later came the verdict: The wiring was not good enough to support the windlass and had failed in some unknown location. A quick fix would be to replace the one wire, but future issues like this would be likely. They stated it would take a day to fix it, but the labor and market rate for the wire would cost at least $1000. I decided to tackle it myself.

We went down to West Marine, bought the materials for a bit less than half price (with my employee discount) on Saturday morning and I started in after lunch and finished Sunday morning. It was a tough job, but Doug and Linda helped with the wire routing. AND IT WORKS!!! We have some great photos of me crawling out of these impossible corners, but this blog thing won't upload pictures, for some reason.

It's RAINING here today. We were going to push off with the outgoing tide this afternoon, but will re-evaluate this afternoon. So we'll go grocery shopping and other stuff instead. There are lots worse places to be stuck, that's for sure. And I'm not going to complain, as this is really the first issue we've had with the boat since May.
Posted by Colwell/Janacek at 7:21 AM 1 comment:

We are sitting at a free dock at the Bennett Bros Marina after a day's run from an anchorage at Calabash, SC. It was sooo quiet and peaceful, far from the hustle and noise here in Wilmington, a big town. We pulled into here and I tried to adjust the anchor and the windlass makes a funny noise. This is a great place for a problem like that to surface, I can tell you. They will fix it if i can't.

This is the place where we had the boat worked on last and where I rode out Sandy, the big hurricane. The cats even recognized me!

And while I'm on the topic of broken things, I believe I have a hernia. Just thought you might want to know and I figure I should let you know before anyone asks me to move anything heavy. My doctor told me not to do anything I don't want to until I get it fixed.

I tried to post some photos from Brooke Green Gardens, reportedly the most extensive collection of sculpture in North America, but the program wouldn't work. Later. If you ever get a chance to go there, do so. It will knock your socks off.

We are having a crew change here; Bob and Susan are going home and their spots will be taken by Doug and Linda Peterson, just after they have gotten trained and know where everything is. Sally's the best, though.

Posted by Colwell/Janacek at 6:28 PM No comments:

So our outboard was afflicted with ethanol poisoning, again. This whole ethanol problem begins with our government's pandering to the agricultural lobbies and ends by killing small engines all over the US (why are other countries so much smarter about these things?), including chain saws, lawnmowers and all sorts of small engines, especially outboard motors. Ours has now been to the hospital five times for these afflictions, all caused by ethanol.

Today we were all ready for it. We had called ahead to the Fernandina Beach Outboard Hospital and told them we would be coming with lights and sirens at 1500 hours with the latest victim. We expected to see experienced technicians gowned and ready with an outboard motor ambulance at the dock. In fact, we just got some excuses why they couldn't be there. They left us with a story about not being able to release it for as long as 48 hours. Too long, as we are on somewhat of a schedule. We cancelled that group (Oh, when are we going to ever have universal heath care?) and went back to the boat. And did I mention we were out of groceries?

En route we met a couple guys on a charter boat on our dock. The moral of this story is that it never hurts to bullshit with other boaters on the dock, never. To make a long story short, they gave us the keys to their vehicle and then called up "Leroy," who fixes outboards, directing him down to the dock to minister to our needs. Leroy showed up minutes later (without the gown and ambulance, but we were beyond caring about sanitation issues by now) and hauled the outboard away for emergency care, while we took the charterer's truck to the grocery store. Yes, the truck was a little messy, but...

A short time afterwards, we had filled up on groceries, gone to the recommended local eatery and Leroy brought the motor back, fixed. Life is good, and people are great. The moral of this story is that it never hurts to bullshit with other boaters on the dock, never. Fernandina Beach is a great and friendly town. Capt. Jeff
Posted by Colwell/Janacek at 6:42 PM No comments:

Back, in the USSA! 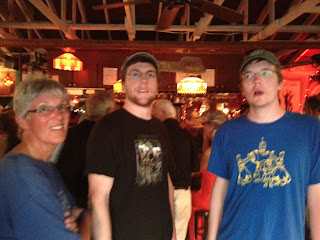 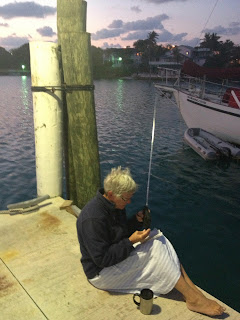 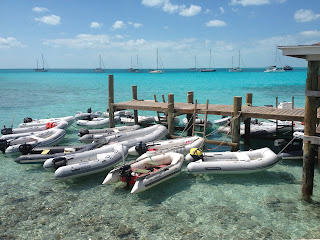 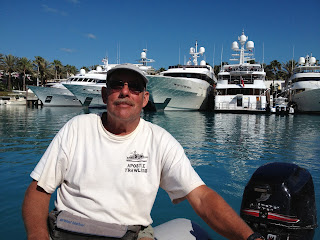 Here's a random sampling of photo from our recent travels. Sally and the boys are featured at some event, Sally is communing by SSB radio with the weather guru at 0630 in Nassau, a collection of dinghies at the dock in Black Point Settlement, and me in my favorite boat doing the yacht review in Atlantis Marina in Nassau. I didn't find any I liked.

But now we are back in Florida. We made a pretty good crossing from Cat Cay to Lake Worth and were able to check in with the border protection folks by phone. This is always an adventure, as they have so many personnel and so many programs and such a wild variety of knowledge and people skills. It's often very frustrating to deal with them about any of this.  Some of them take advanced courses in arrogance.

We are now in the municipal marina Vero Beach, where some collection of government has really gotten it right. This place is so user friendly, with laundry, free buses, free internet, a nearby West Marine and cheap mooring rates. It's almost like they are thinking people will stay awhile and spend money. Many do, and for more than a few days as they have richly deserved the moniker "Velcro Beach."

A big storm came through yesterday, big enough for us to hide on the big mooring ball behind the trees. They predicted high winds, hail, tornadoes and all sorts of nasty stuff. We are fresh from the Bahamas, where it seemed pretty benign with only wind to contend with. So we stayed put.

Yesterday I made a run to the West Marine to pick up some line and a new horn. I made it out for the bus in plenty of time, but there was no bus. I then recalled the driver telling me they sometimes pulled the buses in bad weather, and it looked pretty bad to me. I envisioned myself standing out in the street with a very wet paper bag waiting for a bus that wasn't coming. I went into the local Publix grocery store and called a cab. Can you believe it? I was desperate enough to pay for a taxi! The taxi company told me they were on shift change and couldn't get to me for 40 - 45 minutes. This was not good and it was raining. And I still had to dinghy back to the boat in the storm.

I stood there for a while and decided to use the last tool in my bag. A lady pushed a cart full of groceries out and didn't look like she would mug me. I asked her if she would give me a ride to the marina for $20, twice the cab fee. She wouldn't take any money, but said I would have to share the car with her kids. Imagine that? She wouldn't dump her kids out in the rain to give a total stranger a ride to the marina which she had no idea where it was. (That's a bad sentence, but I'm sticking with it.) So she did. And they were from New York City, and lived in Vero Beach in the winter. People are great.  Capt. Jeff
Posted by Colwell/Janacek at 5:34 AM No comments: