We had an amazing two weeks of warm, sunny weather as we cruised down the Hudson, around New Jersey and into Chesapeake Bay. What a fall!

We stopped at Hyde Park Landing and picked up a mooring ball (with a lot of effort - very short chain on the ball so it took both of us to get a line on it) and had a wonderful hike through the woods to the FDR Library and Museum. We had been there in the spring, a day before the redone museum was to reopen, so we wanted a chance to visit again. It was well worth the stop - both for the hike and a chance for Jeff to discuss world events with FDR and Eleanor. 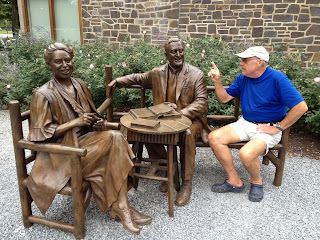 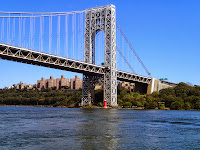 The rest of the trip down the Hudson was beautiful - trees just starting to turn on the hillsides. We zoomed under the George Washington Bridge and through the harbor to the anchorage behind the Statue of Liberty. It was tantalizing to see New York, but it doesn't really work to get there from the anchorage, so we just waved as we went by. 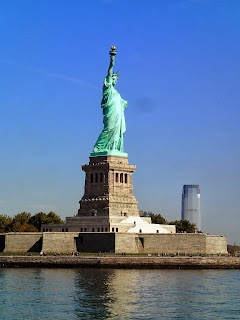 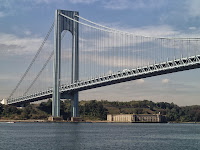 The wind predictions were a bit iffy for getting around the top of NJ where you have to go out onto the Atlantic, so we passed under the Verrazano-Narrows Bridge and headed to the west side of Sandy Hook for the night. The next day the wind was moderating and coming off the land, so we went out to try it and had a lovely run down the coast to Manasquan Inlet, hitting it at slack tide and entering with flat water - much different from the wild, wavy entrance we encountered last fall. I liked this time much better. We continued down through the canal into the top of Barnegat Bay and anchored for the night.

We left the next morning down the Intracoastal Waterway through the Bay to Beach Haven, NJ: home of cheap diesel and a lovely town. We spent the night in the marina and had dinner with new dock mates. 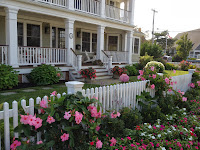 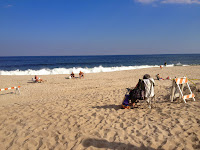 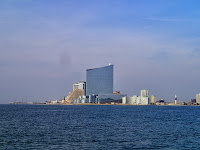 Then with good weather predicted, we headed out Little Egg Inlet and took the outside route along the southern part of New Jersey. This was a first for us - we've always taken the shallow, twisty ICW. We had the perfect day and it went well. We passed Atlantic City, beautiful beaches, only a few fishing nets and came into Cape May early in the afternoon. We went through the Cape May Canal and anchored off the southern breakwater then dinghied back to town to explore. We found a Monk, "Significant Other,"  tied up at one of the marinas and met a great couple who are now live-aboards, then back to the boat and a walk down the nearby beach. 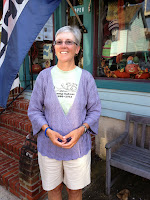 We were up early the next morning to catch the tide/current up Delaware Bay and we managed to hit it perfectly! We had a push all the way up the bay to the Chesapeake and Delaware Canal, where the tide turned and we were scooted through with an extra 1.5 knots of speed to Chesapeake City. When we arrived we lucked out to find an open spot on the free town dock, so we tied up and walked around town. I was able to visit one of my favorite yarn stores and showed off the sweater I had just finished from yarn I bought there on sale in June.

Later that afternoon, our new friends on "Significant Other" arrived and another spot on the dock opened up so we could share dock space, wine and dinner. A very good night.

Once through the C&D Canal, we were in the top of Chesapeake Bay, where we've been exploring the Sassafras River. We anchored out and had a good swim in almost completely fresh water on a hot afternoon. We came into Georgetown Yacht Basin to wait out a windy, blowy few days and have had lots of fun waxing the boat - not really! But the boat does look fresh and shiny.

Today we'll head over to Baltimore to await the arrival of our friend Peg, then more of the Chesapeake to explore. Sally

Posted by Colwell/Janacek at 7:38 AM