We are working our way down the East Coast. The water is getting warmer, so the lobster pots are disappearing, but are being replaced by crab pots (which look a lot the same). At Cape May, the southern tip of New Jersey, we had a great afternoon exploring a nature preserve then riding bikes along the Wildwood boardwalk. Most of the boardwalk stores were closed and the many amusement parks along the way were silent. It must be a crowded, noisy place in the summer! 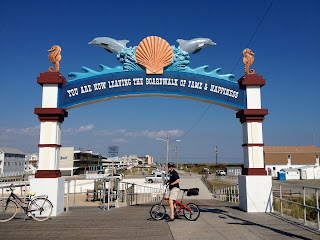 For supper, we ate blue claw crabs at the restaurant at the marina. A tray of crabs was placed in front of us and luckily a woman at the next table saw our confusion (and Jeff's raising of a wooden hammer to hit one) and gave us an inservice on crab consumption. You hold the legs on one side and use a thumb to pry off the carapace, break the body in half, shake out the green stuff, then break apart the base of the legs to get out the meat. The hammer is used only on the claws. By the end of the tray, we had the technique down and were complimented by our instructor that there wasn't much meat in the bowl of discarded shells. Sally 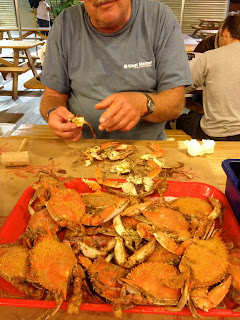 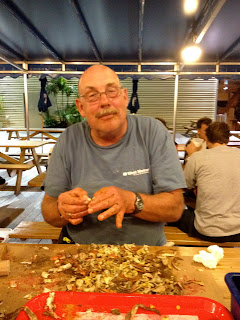 Posted by Colwell/Janacek at 3:24 AM