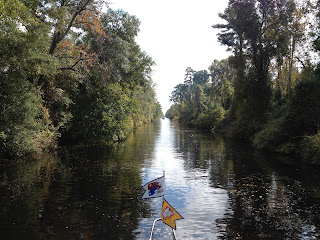 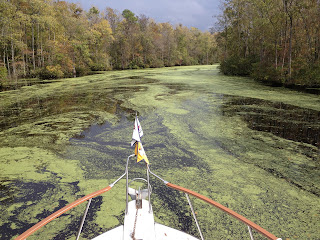 First, the Dismal Swamp, a really nifty stretch from Virginia to North Carolina, a route surveyed by George Washington a while ago with a lock at each end. It's a fairly narrow and shallow corridor that many boats can't take due to their height or draft. We had a great time, stopping at the visitor's center for the night. We just can't pass up a free dock. We met some great new friends and pushed off the next day on our southward journey.

We crossed Albermarle Sound early, as this is one of those places on the Intracoastal that can get really mean with the wrong wind. We anchored out in Dowry Creek, a great dark spot to watch the anticipated meteor showers that were supposed to light up the night. I got up at 0400 and can attest the night stayed pretty dark. We got to Oriental, the Sailing Capitol of North Carolina just in time to secure a spot on the free city dock. We made some new trawler friends there on "Clover" and went to Morehead City, where we tied up next to a restaurant ($25 if you eat there. What a bargain.) and waited for Dave and Lisa on Ke 'Ola Kai to roll in. They are 70' tall and too deep to go inside and have to go outside.

We were starting to get some serious reports of a hurricane brewing in the Caribbean, not good for any boat, especially a little one like ours. Back in 2007 when we came this way we had a tropical storm go by us while we were tied up inside next to a restaurant. It sunk four 60' custom aluminum bluewater sailboats. The Coast Guard saved everyone on three of them, but there wasn't a trace of "Flying Colors" or her crew. This is serious stuff and we started to plan for it.

We had already planned to get hauled out and get the bottom repaired after our little running aground incident in Ontario. We also needed a new survey for insurance and new batteries. Thank goodness that grounding stuff is never going to happen again, right? We made reservations to have the work done way up the Cape Fear River in Wilmington, NC and started up there. We turned off the Intracoastal and proceeded upriver with the tide and promptly ran hard aground, right in the middle of our prescribed channel in two feet of water where all the charts, guidebooks and other sources of this information said there was EIGHT feet of water. As we sat there we watched the locals roar around us on the other side of the greens, where the chart said it was two feet deep. A short time later after we availed ourselves of our towing insurance (the first time ever, really) we were back in business. The tow guy said all the tourists run aground there, but I'm sure he tells that to everyone he tows.

The next day we got hauled out and finally got a good look at what happened when we drove up on that rock in the Trent-Severn Waterway. Actually, not much. It was very difficult to see anything other than scraped bottom paint, but there was apparently some damage to the gelcoat. This is one tough boat. We also got all the batteries replaced, new packing in the stuffing box, the marine survey for the insurance company, a line cutter to take care of any crab or lobster pots we miss and all the anodes checked. We're going to get the valves adjusted, put another filter on the dinghy motor and replace an antenna. And then we are all done working on the boat, forever. Nothing else will ever break or need fixing from now on, really. That's good, because I really don't like working on boats, really.

But back to Sandy, the hurricane, serious stuff, like I said. Down on the coast they are expecting 50 - 70 mph wind, lots of rain and big waves. We elected to stay up on the stands here in the marina parking lot, quite a ways from all the action. I have a rental car, power, water, restrooms, internet, TV and a cat to sit on my lap whenever I leave the boat. Sally went back to Minnesota, though. She's going to a concert tonight, one of David's plays tomorrow and will try to generate some income. I'm going home before Thanksgiving having successfully gotten two great buddies to help me get Adirondack to Jacksonville, where he will wait for us until after the New Year. And then we are off to the Bahamas. Capt. Jeff


Posted by Colwell/Janacek at 6:12 AM