Circle Games - Life is a Carousel

We've completed the Downeast Circle Loop!! We anchored Monday night in a spot behind the Statue of Liberty, in the same place we spent time 5 years ago when we were cruising the Great Loop, so we've officially "crossed our wake." Now we head down the coast! 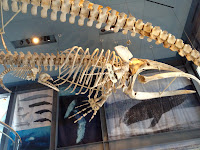 We had a wonderful time along the New England coast. After leaving Boston, we passed through the Cape Cod Canal and got to New Bedford, MA. They have a wonderful whaling museum and great old downtown. Herman Melville based a scene from Moby Dick on the Sailor's Bethel, a chapel in town. 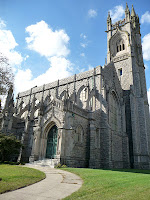 We were turned back by high winds when we left, so spent an extra day exploring Fairhaven, the town across the river with some amazing architecture, a scrimshaw shop, a great yarn store and a huge West Marine store. We were all happy.


With the winds and waves still big, we took the ferry to Martha's Vineyard for a day trip. The cruising guide mentioned there was the "Flying Horses" carousel in Oak Bluffs. Peg collects carousel horses and knows so much about them. She managed to arrange a visit to the closed building and a tour with the manager, Robin, who obviously    loves the carousel she cares for. 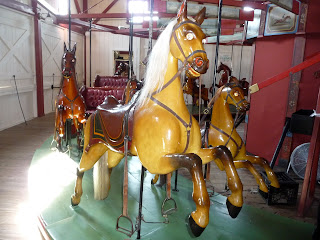 The next day, the weather gods smiled on us and we headed for Newport, RI. We rode the trolley tour and saw many of the old mansions of the upper crust rich and famous. We were windbound again the next day and walked the Cliff Walk then split up to see the boat restoration school (Jeff) and the National Museum of American Illustration (Sally and Peg). We dinghied back to the boat for lobsters - just missing the rain squall.

New London, CT was the next stop - to pick up some GPS chips for the chart plotter that we had mailed there. The marina was a bit funky and rough around the edges, but the people were great. They were having a get-together / barbeque and we were invited to dinner and good conversation.

The next day we made a long jump to Black Rock Harbor and then were able to get all the way to New York then next morning. We passed all my old places from growing up - Larchmont, New Rochelle, Pelham. Places that I had spent time on Long Island Sound on other boats and with other friends and family. Another circle. 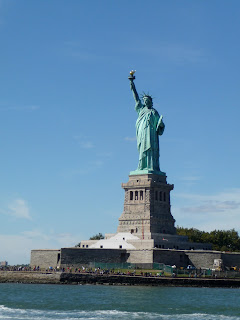 We timed coming into the East River and Hell Gate perfectly - getting a push under the bridges and along the east side of Manhattan with views of the Empire State building and the new World Trade Center. We finally emerged into the Hudson River, crossed to the other side and the protected, free spot behind Lady Liberty. 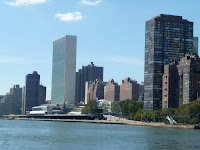 After dropping off Peg to take the ferry across to Manhattan, we headed under the Verrazano-Narrows Bridge and across to Sandy Hook NJ then down the coast to Manasquam, where we come into the start of the protected, calm Intracoastal Waterway that will take us South. Sally
Posted by Colwell/Janacek at 10:26 PM